Lots of things coming soon.  Just about to post a bunch of fireworks coupons.  This 4th of July I will be working two display shows and will be posting a lot of pictures along with videos afterwards.  Let me know if there is anything you would like to see detailed in the video.  Also will be posting a big story and interview about a new pyro training program.  Also after the holiday I will be adding alot more links and resources.  Check back soon! 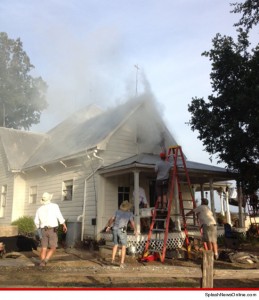 Seems like recently we have been reporting on a lot of accidents.  Honestly I would rather be posting fantastic coupons and amazing videos.  This time it was a practical location for the movie Transformers 4.  The location is 100+ year-old home in Austin Texas, which had substantial damage in the attic.  The fire is believed to have started from some embers from pyrotechnics, however that has not been confirmed. Source

One of the last things I would want to have happen while driving a truck loaded with fireworks.  To hit a moose!  Hitting a moose with my car just over a year ago was enough for me.  Check out the video below.  Source

Losing a family member is never easy.  When someone impacts your life as much as I have heard Grandma Helen did for everyone involved at Jakes Fireworks, it makes it even that much harder.  I never met her, but from what I have heard I wish I had.  The stories of her life remind me of my own Grandmothers whom I miss greatly.  They were a strong generation of women.  This Fourth of July will be a hard one for the Jake’s Fireworks family.  I for one will be praying for them.  And while I will celebrate our freedom this 4th, I will also be thinking of Grandma Helen, and my own Grandmothers.  Jake’s Fireworks Blog

Recently a lawsuit was filed against the Discovery Channel.  During the filming of a pilot of a new series (Brother in Arms) a contestant was hit by a pyrotechnic device. The contestant unfortunately did not survive and the accident.  It appears that there were no permits to use pyrotechnics during filming, and also sounds like the device that caused the death was illegal and untested.  Accidents like this can be prevented!

Whenever you are doing proximit fireworks test every device.  Follow local laws and regulations, and obtain the proper permits.  No one’s life is worth cutting corners.